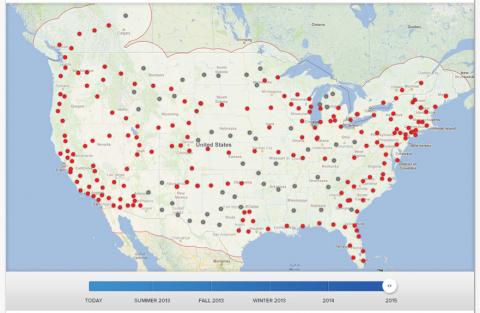 "We will soon roll out 120 kW Superchargers, which are 33% faster than our current version and can replenish half a charge in just 20 minutes, for free. It works by delivering DC power directly to the battery using special cables that bypass onboard charging equipment."

"A properly equipped Model S can charge for free at any Supercharger once enabled, unlike gas stations that require you to pay for each fill-up. Supercharging is included in every Model S with an 85 kWh battery, and can be added to any 60 kWh Model S as an option, or at increased cost after delivery. Simply pull up and plug in, take a quick bathroom or food break, and get back on the road."

The above image shows the projected locations of the Tesla Supercharger network be 2015.  The grey dots will be the last ones to be added.

"Now Tesla’s chief technology officer, JB Straubel, says the company eventually could cut the time it takes to fully charge the battery to just five minutes—or not much longer than it takes to fill a gas tank.

Straubel isn’t referring to the battery swap technology Tesla recently unveiled (see “Why Tesla Thinks It Can Make Battery Swapping Work”). That system doesn’t charge batteries quickly. It simply takes out a depleted battery and replaces it with a fully charged one. He’s talking about what might be a more appealing option for drivers: recharging the battery in your car while you wait.

“It’s not going to happen in a year from now. It’s going to be hard. But I think we can get down to five to 10 minutes,” Straubel said in an interview with MIT Technology Review. He noted that the current superchargers, which deliver 120 kilowatts of electricity, “seemed pretty crazy even 10 years ago.” Conventional public charging stations deliver well under 10 kilowatts."

From the Tesla page, I thought this piece was interesting:

"The fastest way to replenish your Model S is to charge to 80% state of charge, which is more than enough for travel between Supercharger stations. Charging the final 20% takes approximately the same amount of time as the first 80% due to a necessary decrease in charging current to help top-off cells. It's somewhat like turning down a faucet in order to fill a glass of water to the top without spilling."  This is illustrated below: 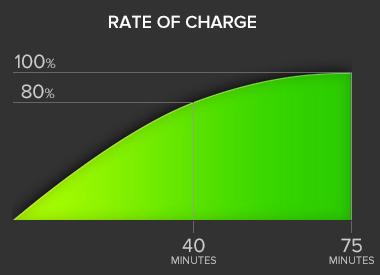 The bad news for non-Tesla EV owners is that they wont be able to use the charging stations.  What do you think?  If you had range anxiety, will this ease your concerns?