What most people visualize when the "light bulb" goes off in their head and probably the most common type of residential light bulb is the "A" shape. Common sizes of the A bulb are A15, A19, and A21. The number designation in the code is usually the width of the bulb at its widest point designated in eighths of an inch. So an A19 is an A shape bulb and is 2.375 inches in diameter (19 divided by 8).

This code designation applies to almost all types of residential lighting, where the letters stand for the bulb shape and the number is the diameter at the widest point. An exception to this is the twisted compact fluorescent bulb (CFL) that doesn't have a common designation code.

Bulb Shapes The table below shows some of the common residential bulb shape codes.  Thanks to Home Depot light bulb shape page and Natural Resources Canada. 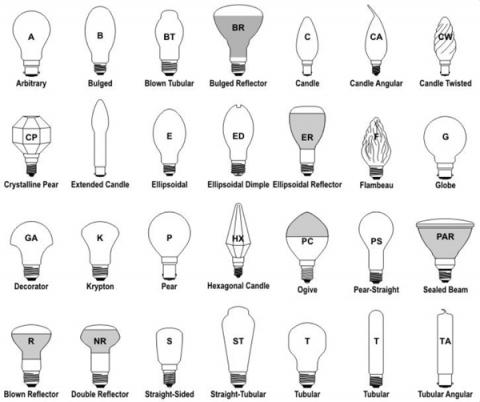 Bulb Sizes Thanks to this size chart from Bulbs.com. Take the number and divide by 8 and that is the diameter of the bulb at its widest point.

Bulb Base The final important piece to selecting the right bulb for your application is the bulb base. You don't want to buy a bulb only to find that it doesn't fit in the socket. Most light bulbs used in the home use an Edison Screw Base. This is designated by the "E" in the first letter of the base description. Most CFL and LED replacements for incandescent lights will use the "E" base. From Wikipedia on the Edison Screw Base: "The Edison screw fitting is a system of screw mounts used for light bulbs, developed by Thomas Edison and licensed starting in 1909 under the Mazda trademark. The bulb has a threaded metal base which screws into a matching socket. Most have a right-hand threading that tightens when the lamp is turned clockwise. " And... "Dimensions and tolerances for screw bases are standardized in ANSI standard C81.67 and IEC standard 60061-1. The two standards have mostly been harmonized, although several types exist in only one of the two standards with no equivalent in the other. The designation Exx refers to the diameter in millimeters, even in the U.S., where the bulb glass is listed in eighths of an inch. (For example, E12 has a diameter of 12 mm.) There are four common sizes of screw-in sockets used for line-voltage lamps:

Another type of base seen in MR style lamps is the G base, which is a bi-pin style of base.  From Wikipedia on the bi-pin: "The suffix after the G indicates the pin spread; the G dates to the use of Glass for the original bulbs. GU usually also indicates that the lamp provides a mechanism for physical support by the luminaire: in some cases, each pin has two diameters, being larger near the ends, in order to twist-lock into position in the socket (the transition between the two diameters is a right-angle step rather than a taper); in others, the base of the lamp has a groove which can be held by a spring or clip. A lowercase "q" at the end of the designation indicates that it is a quad-pin base, with two bi-pin pairs. These are used with compact fluorescent tubes that plug into a light fixture that has a permanent ballast. There are also double-ended tubes (both halogen and fluorescent) with one pin at each end, as well as high-output fluorescents with recessed or shrouded contacts, which are not covered here.

You can see excelent pictures of all types of bases from Bulbs.com and their base chart. Note that the compact fluorescent bases shown are mostly for the higher wattage CFL bulbs found in commercial applications. Most CFL (and LED) bulbs for the home use an "E" style base.